The School Time Capsule Project exists to motivate students toward the highest achievement possible.  That achievement is driven by students who know where they came from, their roots, and where they are going, their plans. Students and parents must discuss as much as possible the history they share. With that foundation students focus more completely on their own goals by constantly updating them. Such grounded student motivation is the mission of the School Time Capsule Project.

After 14 years of improvements due to constant input, one of the 6 active Time Capsule Project middle schools have had the highest annual School Effectiveness Indices (SEI) score of all 33 Dallas ISD middle schools for three of the past 4 years!  This past year that number one school had been in danger of being a fifth year IR, failing, school.  Instead, with full, all grade, involvement in the Time Capsule Project, and most parents writing letters to their child, the school not only met standards but achieved 4 distinctions, and their School Effectiveness Indices went from only 47 to 61, the greatest one year increase in a DISD Middle School in 8 years, and the highest SEI among all 33 middle schools!

On 10-19-17, when the most recent SEI data was released, it was also discovered that four of the five DISD middle schools with the highest SEI's this past year were Time Capsule Project Schools!  (The School Effectiveness Indices (SEI) is a DISD measurement of school performance that has been used 20+ years to measure performance in each DISD school every year.)

See page 2 of the 2016-17 Summary List at https://mydata.dallasisd.org/SL/SD/SEI/Default.jsp for the middle school listings which are repeated in the chart below. Notice below that the 'worst' SEI for an active Time Capsule Project school still places them better-than-average as 13th best among 33 middle schools.

The Time Capsule Project is expanding this year to 9 more schools, including elementary schools for the first time. From third grade through 12th grade there will be two annual lessons:

1.   Students write a persuasive letter to their parents, and/or other relatives, asking for them to write a letter back. Students ask for two things in these letters: "What are your dreams for me?" and "Please write one story from your personal family history that you want me to pass on to my children someday." As many as 80% of families have responded and write potentially priceless letters since this change was made in 2016.
Students then talk with anyone they asked to write a letter about what they have written. Students must be certain they understand the letter. Such conversations can be priceless, reinforcing family relationships.

2.   The resulting letters from lesson 1, or copies if the family wants to keep the originals, are brought back to Language Arts Class where each student prepares one self-addressed envelope to hold them. Then the student writes their second letter, this time to themselves about their own goals and dreams. All letters then go into that self-addressed envelope for each student. The date this envelope is sealed must be on the envelope near the return address.  This is critical in the sorting and management of letters.

These envelopes go inside a 500-pound, or larger, School Time Capsule Vault in the school lobby. The first 11 vaults were 25 cubic feet inside, weighing 500 pounds and bolted to the floor, costing $1,200 each.  In 2017/18 we are focusing on a 700-pound, 43 cubic foot inside measurement Costco vault costing $900 delivered and no longer bolted to the floor due to the weight.

The previous year’s letters are always studied by students before the next letter-writing actions. In 8th and 12th grades all letters are written focusing on goals 10 years into the future. Students know they will be invited back for a 10-year reunion to pick up their envelopes, usually scheduled just before Career Day. At that reunion they will be asked to return and speak on Career Day with then current students about their recommendations for success, their profession, and life after 8th or 12th grade.

The fourth such 10-year reunion will happen this year at Quintanilla, the first Time Capsule Project School. It is still a 95% high-poverty school, but Dr. Hinojosa, DISD Superintendent, last summer named Quintanilla as the best middle school, the model middle school inside DISD.

The newest recommendation is, when possible, that a school secure the large 43-cubic-foot vault below, now on sale at Costco for $775. With such a large vault every student can be given a large 9"x11" envelope to use in storing their envelopes every year in the vault.  Each year students can read what they have written before as they plan that years letter.  Ultimately the school can leave all letters in the vault for the 10 years.  Fewer letters will be lost. The 10-year reunion will become more significant, especially with letters from parents and other relatives each year.

Quintanilla has had SEI scores among the top 20% of DISD middle schools every year for the past 4 years. Such progress will now happen much more rapidly in new Time Capsule Project Schools due to improvements outlined above. It will not take a decade!

One or more volunteers are needed to function as Time Capsule Masters at each school to help manage the Time Capsule Project.  They sort and help teachers return each year the letters from the previous year by each student.  Once the 10-year reunions begin, these volunteers help manage the reunions. This is exceptionally rewarding volunteer work. I have done it for over a decade, one of many volunteers with many wonderful stories to tell from the Project. We need more volunteers, at least one at each school.

Last year Browne had all students in all grades write letters as described above. Parents responded wonderfully! The photo below shows today’s Browne Time Capsule with the results: 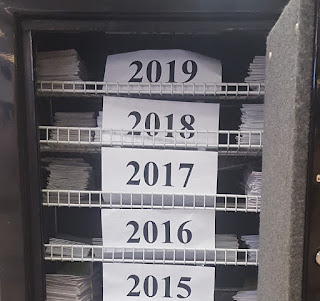 Notice that the shelf for this year’s 8th grade class, 2018, as well as next year’s 8th grade class, 2019, are already filled with letters. These are the letters written last year by then 6th and 7th graders.  They will be returned to those students, and read, before this year’s letter writing. By the end of this year new letters will fill these shelves. The only difference will be that shelf “2018” will hold letters about dreams and plans for 2028. Those letters stay on that shelf until 2028.

It is recommended 6th and 7th grade classes write letters at the beginning of the year to have the greatest effect on achievement that year. It is best 8th graders wait until the end of their 8th grade year to be able to reflect on more of their middle school experience as they write their letters planning 10-years into the future. Such future-focus by all students was one of many factors that helped Browne achieve the highest SEI scores of any of the 33 middle schools in DISD for 2016/17.

The year these letters were written by all Brown students the SEI for Browne went up 14.2 points in just one year to being the highest SEI score for any DISD middle school!  Browne went from 5th year IR to not only meeting standards but also achieving 4 distinctions!  See https://www.dallasisd.org/Domain/621

A School Time Capsule Project only works in a school that is already a high functioning school under solid leadership. Once you have that, and add to it the grounding in family history and planning for the future reinforced by the Time Capsule Project, you have even greater achievement due to stronger student motivation. Positive student behaviors increase!

School Time Capsule Vaults should be located in the highest student traffic area of a school, usually the lobby, to remind students daily of their parents’ letters, and their own plans.
For more details on this open-sourced, low budget, volunteer-based project, see http://www.StudentMotivation.org, and the attached blog. Please share.

You also may just buy a vault and bring it to the school, and help install the needed 10 shelves inside the vault.  This is a very flexible system!  Help your local schools!  Below is one large vault on sale until 12-31-17 for $775 from Costco, a large 770-pound 43 cu. ft. vault.

Any school can start a Time Capsule Project on their own with any modifications they may want.  We only ask that if you come up with what is considered a very successful improvement, that you share the details with us so more students can benefit.  The students are the only reason for this project.

Finally, this is year old data that is still correct if you looks at the DISD Data Portal enrollment for today: Sunset High School has the largest senior class relative to freshman class size of any of the 22 non-magnet high schools in DISD.  This chart was made a year ago, October of 2016, but shows how Sunset is the best at keeping student to graduation. 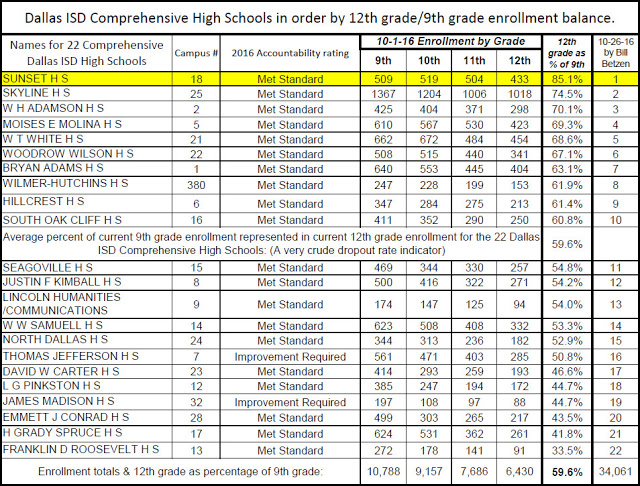 Sunset stands out for many reasons due to Mr. Tony Tovar who turned it around during his 7 years as principal, and due to the wonderful staff who remain at Sunset.  It also stands out due to the future-focus, one grounded in family history, that these students begin in the middle schools feeding into Sunset: Rosemont, Quintanilla and Greiner who all have active Time Capsule Projects.  Then the same focus continues with the Time Capsule Project at Sunset. 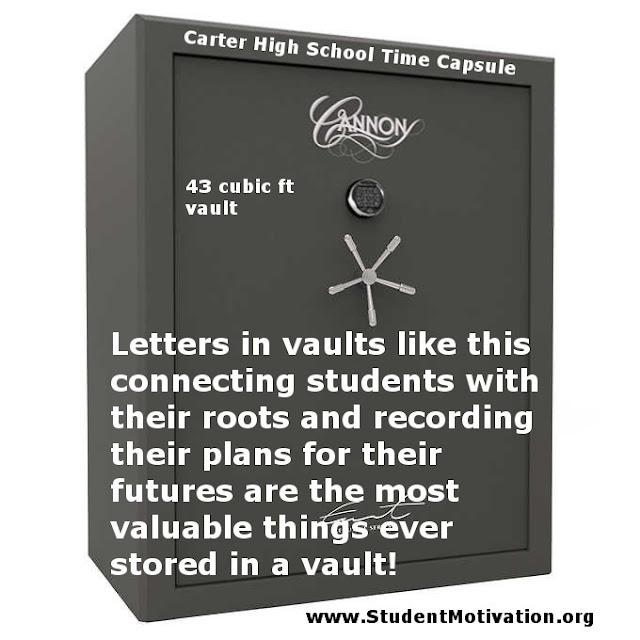